The Lace Reader: A Novel by Brunonia Barry 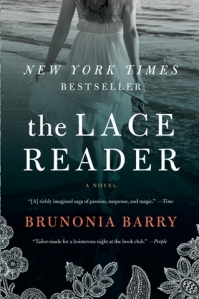 Brunonia Barry dreamt she saw a prophecy in a piece of lace, a vision so potent she spun it into a novel. The Lace Reader retains the strange magic of a vivid dream, though Barry's portrayal of modern-day Salem, Massachusetts--with its fascinating cast of eccentrics--is reportedly spot-on. Some of its stranger residents include generations of Whitney women, with a gift for seeing the future in the lace they make. Towner Whitney, back to Salem from self-imposed exile on the West Coast, has plans for recuperation that evaporate with her great-aunt Eva's mysterious drowning. Fighting fear from a traumatic adolescence she can barely remember, Towner digs in for answers. But questions compound with the disappearance of a young woman under the thrall of a local fire-and-brimstone preacher, whose history of violence against Whitney women makes the situation personal for Towner. Her role in cop John Rafferty's investigation sparks a tentative romance. And as they scramble to avert disaster, the past that had slipped through the gaps in Towner's memory explodes into the present with a violence that capsizes her concept of truth.
(From a review by Mari Malcolm)
Meetings are the 3rd Tuesday of the month at 7:00 pm
Please pre-register by calling 419-586-4442 or emailing Connie Gray at grayco@oplin.org
Posted by editor at 7:00 PM

Thank you for your comments & thoughts.